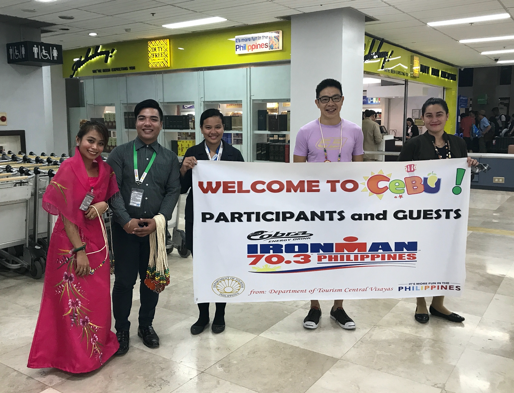 I have decided to write this race report in a different format that explains how this has become a taboo race for me.

I have done Ironman Cebu70.3 twice so far and both races have not been too kind to me.

Don’t get me wrong, Cebu is a wonderful place especially when you are staying at the Shangri-la Mactan. The beach and views are spectacular. It is by far the biggest and best hotel in Cebu and also the official hotel for the Cebu70.3.

For the convenience and the excellent reviews, I went ahead to book it even though it was slightly above my race Budget. Proved to be the right choice as Swee Tin was exceptionally happy with the atmosphere and environment.

Talking about the atmosphere, Cebu spared no expense and effort in welcoming athletes and family to the island and the race. 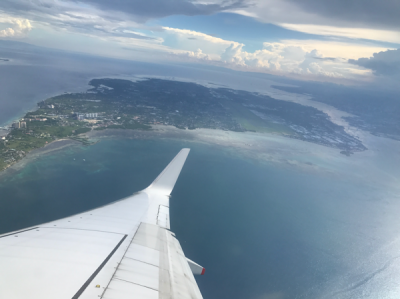 Best reception so far in the Asia race calendar! 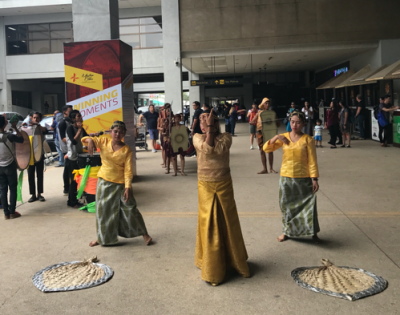 After setting up the all important bike and going through the very smooth registration for my race pack, time to explore Shangri-la… 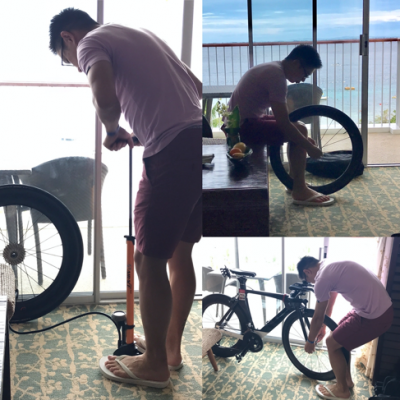 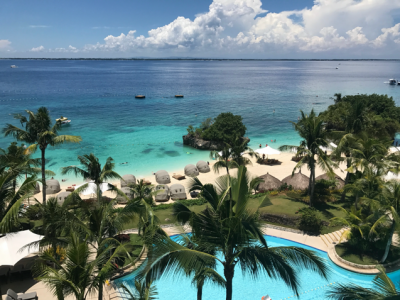 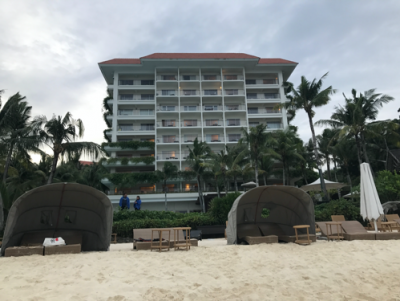 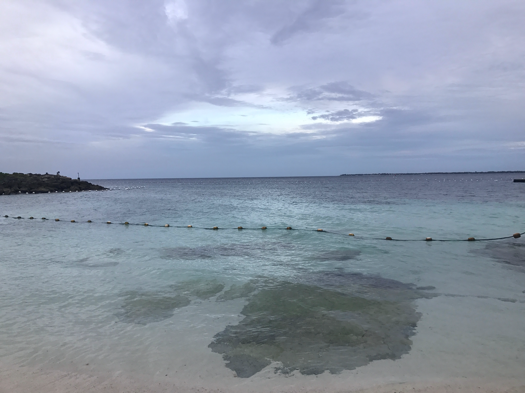 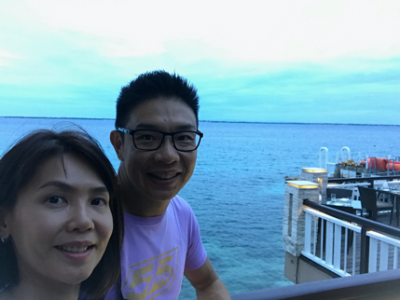 All the niceties done…down to business! 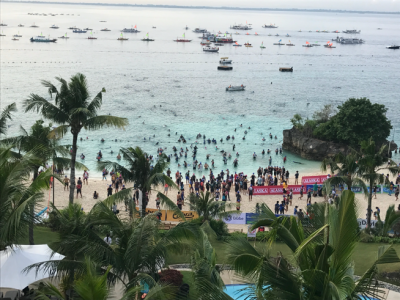 I approached the start of the swim with a little apprehension as this was one the more talked about strong sea currents that saps up your energy and strength. A 1.9km swim can easily feel like a 3.8km swim with the current. The only reprieve was the clear blue waters and vibrant coral reef teaming with sea life. Something you do not get in any of the Asian races. Something I was looking forward to. Helped get my mind off the impending battle with the current. And man, was it a battle… 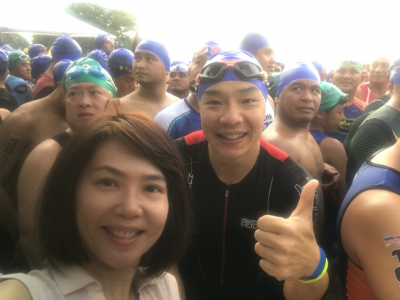 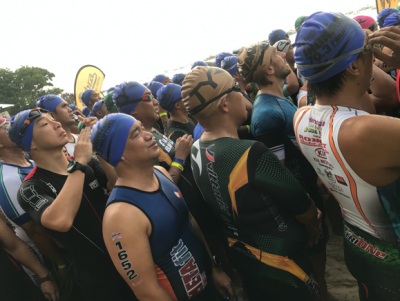 Swim started like all other races…a washing machine albeit a slightly more organized one due to the rolling start. Nonetheless, it was the usual fight to the first turn bouy. Not much time to enjoy the biodiversity of the reef and clear waters for now.

Two turns later, the current hit. Slowly but surely. How I realised I was hit by the current was quite simple. As I breathe to my right, I would usually take reference from an object to guide me in my swim, whether it was a building or a boat. Of course the nearer it is, the better perspective it will give. This time, it was a big catamaran, which I have identified prior to the start of the swim.

Normally, as you swim, the catamaran would move further away from you indicating that you are moving forward. This time, every breath I took, I see the same catamaran. For a moment I thought the catamaran was moving but I knew that all boats are not allowed to move during the race accept for the swim marshals in their canoes.

That was when I realised I was in the midst of the infamous battle with the Cebu current.

Both years that I took part in the race, the currents were relentless. I was told after the race by the organisers that there were many swimmers pulling on the lane ropes to get them back to shore. But the majority of the athletes made it through at the expense of any additional energy saved for the rest of the race.

After expanding that additional gel and piece of whole meal bread I took in the morning, I finally overcame the currents and reached the exit of the swim.

This is where Cebu has been particularly unkind to me. At both times, while exiting the water, because of the waves and struggling with the current, my footing was not so stable and slipped on the corals with deep lacerations on my left and right mid foot region.

Cursing and bleeding ensued especially on the second race. Somehow the bleeding is directly proportional to the cursing and swearing. More cursing, more bleeding. 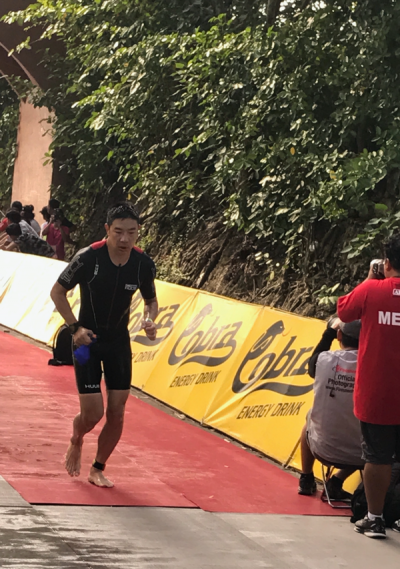 For my first race, I had to DNF as the pain was quite bad during the run. And I do not like to DNF races unless I am almost dying or my wife threatens me with divorce papers. So, you can understand how frustrated I was during my first race.

This time, I know what pain I would be expecting and I am not about to DNF twice. Time to dig deep….And I had to dig really deep.

I went through T1 cursing under my breath. Probably attributed to the really fast transition time. The anger and frustration reduced the pain a little and I did not bother to check on the wound to see how deep it was.

Rolled the bike out of transition and mounted it for the bike leg.

The start of “digging deep” came on the first pedal stroke. As the wound is on the mid foot area, every down-stroke of the pedal is like having a nail piercing the foot. I told myself it could not be that bad and probably caused by the sting of salt water. I should be ok.

The bike route changed over the last few years. The first time I did the race, it was an M-shape bike route. Headwind out and tailwind back. And it was hot, very hot. In the second year, it was 3 loops around the city with some hills in the form of bridges to overcome. In 2019, it reverted to the M-shape route.

I personally feel the M-shape route is much better. Less drafting, less crowded and its just pure power!

Other than the heat and the changing winds, the only eventful thing on the 90km bike was my bleeding foot. Initially I thought I was perspiring heavily due to the heat, but somehow the texture on the foot did not feel right. It felt thicker and stickier and definitely more painful with every pedal. Decided to start pulling up more than pushing down on the pedal. That means using more of the glutes and hamstrings….my run is going to suffer.

Time to test the limits of my pain threshold.

Reached T2, removed my bike shoes and realised my foot was covered with blood. Now I know that it was not my perspiration. Stopped and called the medic over to stop the bleeding and bandage it up. 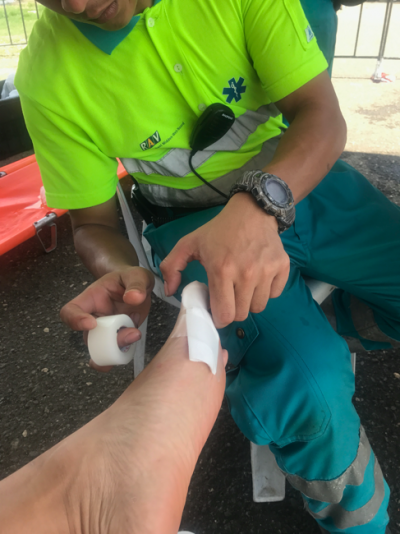 With my foot bandaged up, the medic asked me if I wanted to DNF….that three letters caused a burst of adrenaline to flow through and I immediately stood up and gave a stern “no, I will continue.”

Ran back to my bike rack with the bandaged foot, put on my socks and shoes and started my journey of pain discovery. 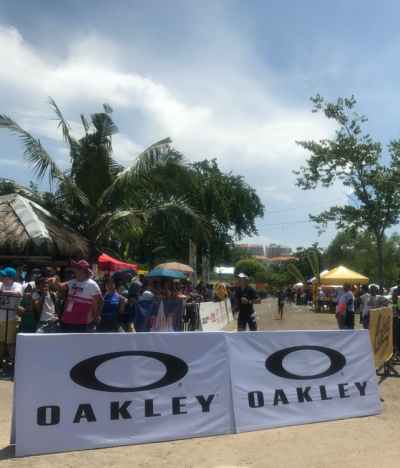 At the beginning of the run, it felt quite ok. But as I approach the 5km mark, I realised my shoes were turning red from all the bleeding at the front portion. That is not good. I told myself I will change the dressing on the next first aid station.

It was during the turnaround that I stopped to change my bandage. The first aid volunteer was shocked I was still running with the condition of my foot and the shoes looking like it had just gone through a major surgery during wartime.

After managing the pain for 21.1km, I finally saw the finish line. Crossed it with a wince and a big smile. Ended in the medical tent with two jabs for tetanus.. 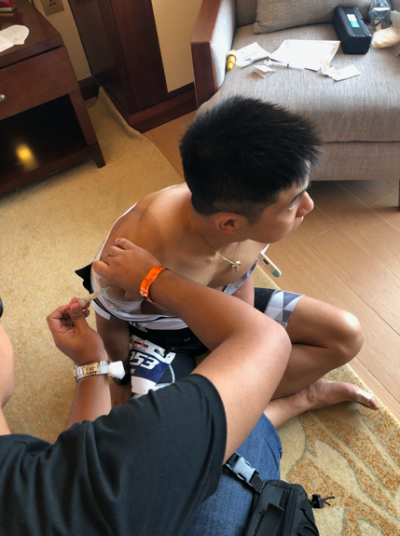 No PB for the race, but a PB in terms of bringing my pain threshold up a notch! 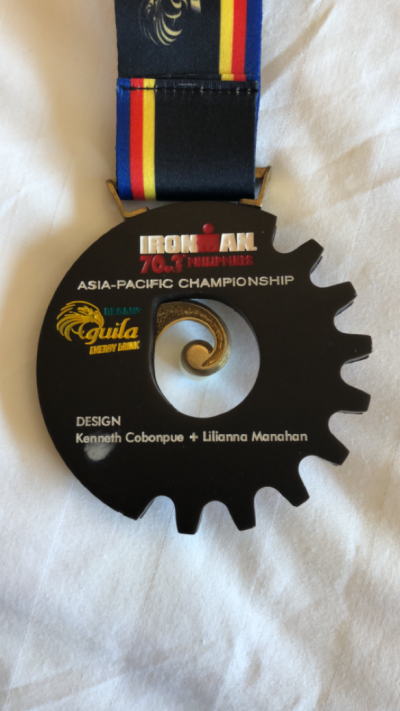 Tips for the race –

If you are on a tighter budget, there are many other good hotels along beach that is not very far from the race venue. See the map below 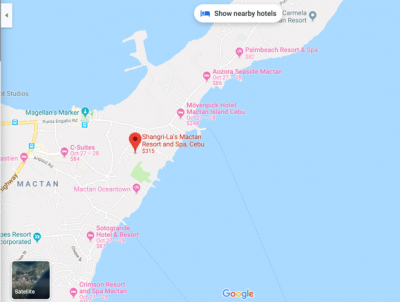 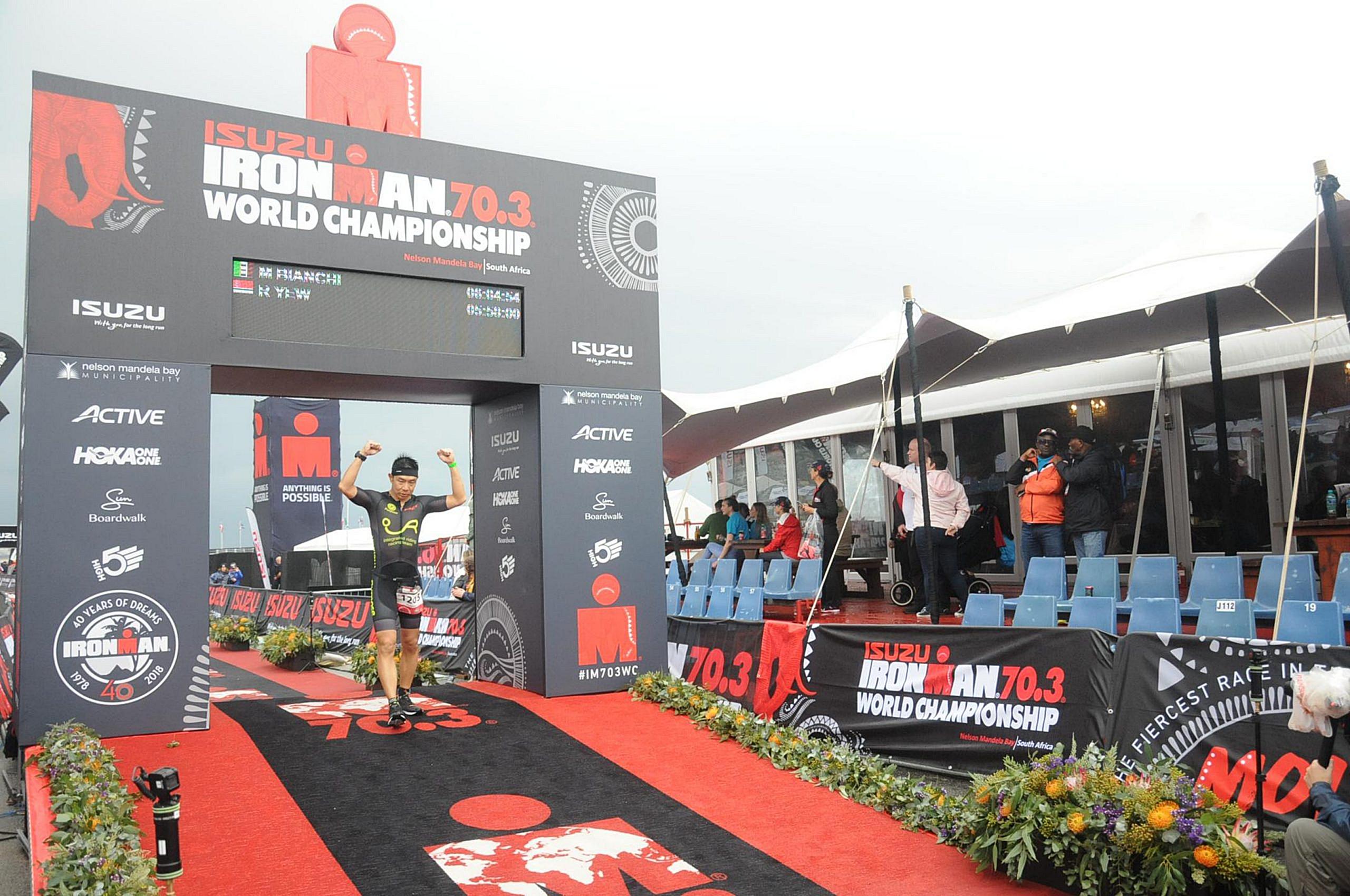 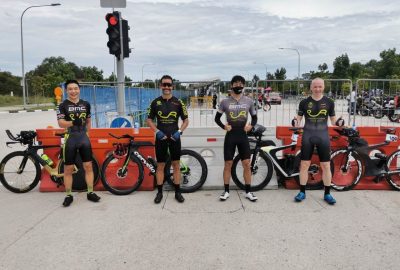 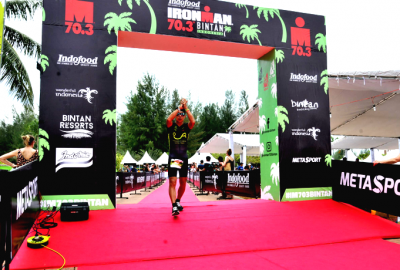 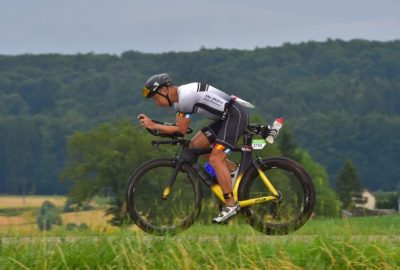 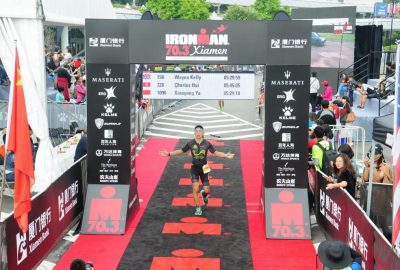 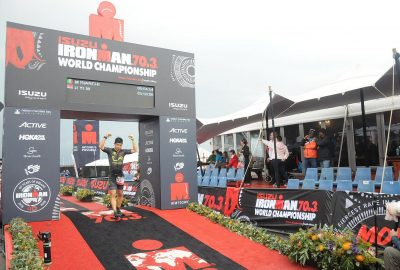